2020 Housing Bills: Legislation in an Age of Uncertainty

Amidst profound uncertainty caused by the Coronavirus pandemic and new economic climate, California’s State Senate and Assembly have pressed ahead with a flurry of housing bills that attempt to address the state’s housing challenge. A number of these bills represent adaptations of earlier upzoning bills, including the heavy-handed SB-50 which failed in a Senate floor vote in January 2020. Other bills pursue developer bonuses and incentives for moderate-income and market rate housing, with little obvious benefit to lower-income households. These bills also create new complexities and potentially set up conflicts between local land use and state law — with no clear path for resolution.

The Embarcadero Institute has prepared a summary analysis outlining each bill’s potential effects, benefits, interactions with existing legislation, and inconsistencies. The bills can be broadly categorized into six buckets, defined by their approach and potential impact. Some fall under multiple categories: 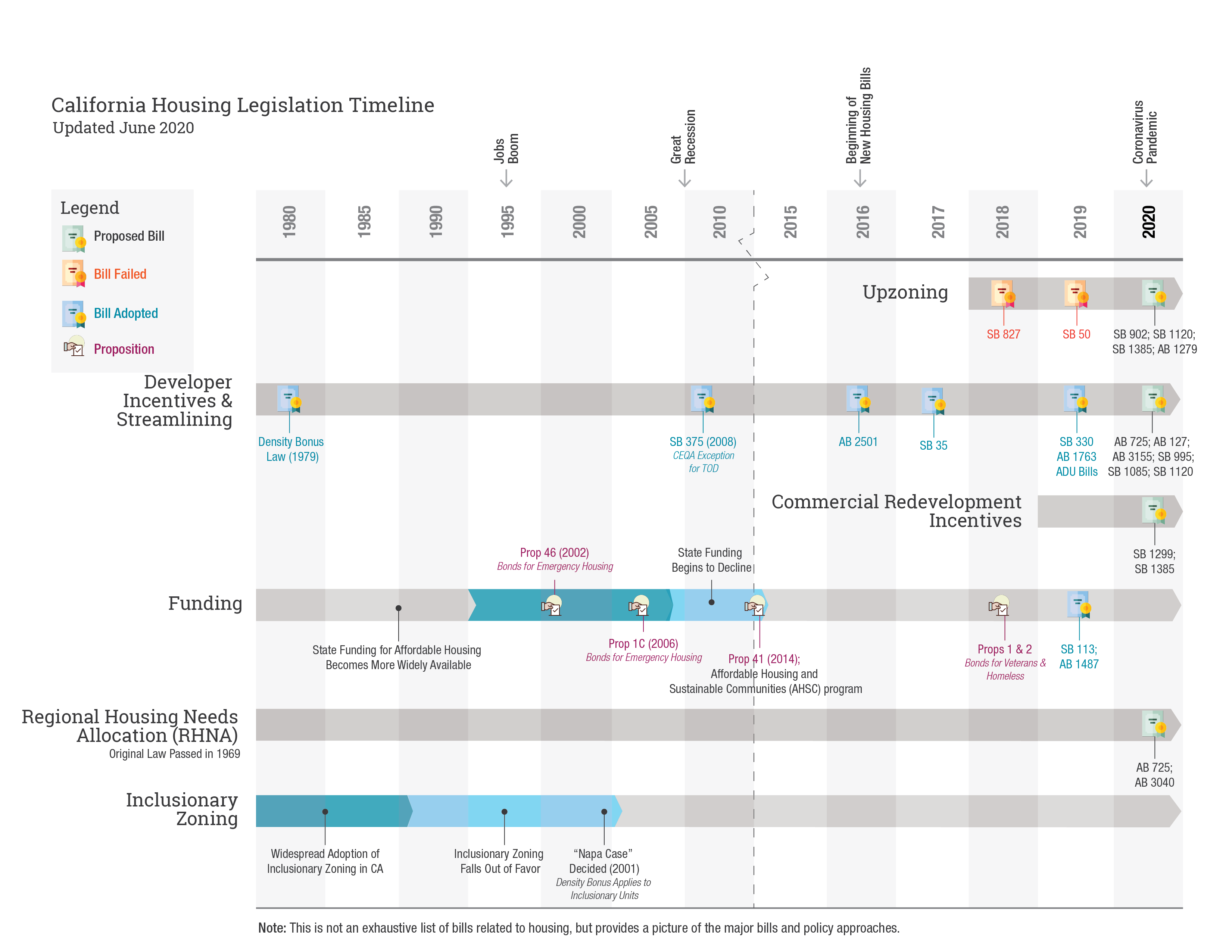 During the Great Recession, the state terminated most of its funding for affordable housing by shuttering local development agencies (RDAs) (see Embarcadero institute, 2020). At the time, RDAs were providing 80% of the state funding for affordable housing through the redeployment of local property taxes. Facing a budget deficit, Governor Brown froze local redevelopment activities in 2011, and shuttered the agencies in 2012, diverting their property tax resources to schools and local services to backfill the state funding shortfall (see Fig. 1). 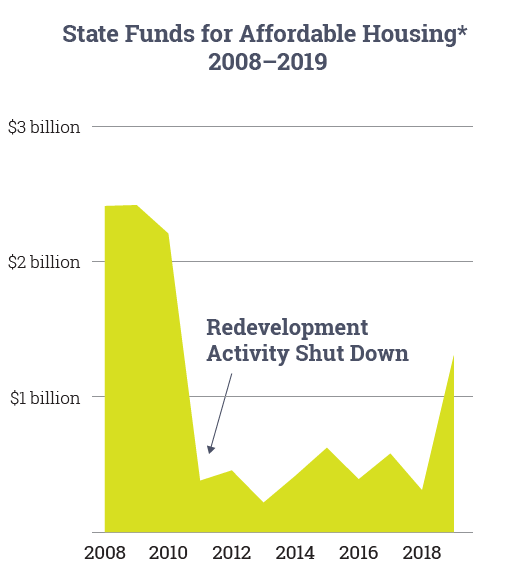 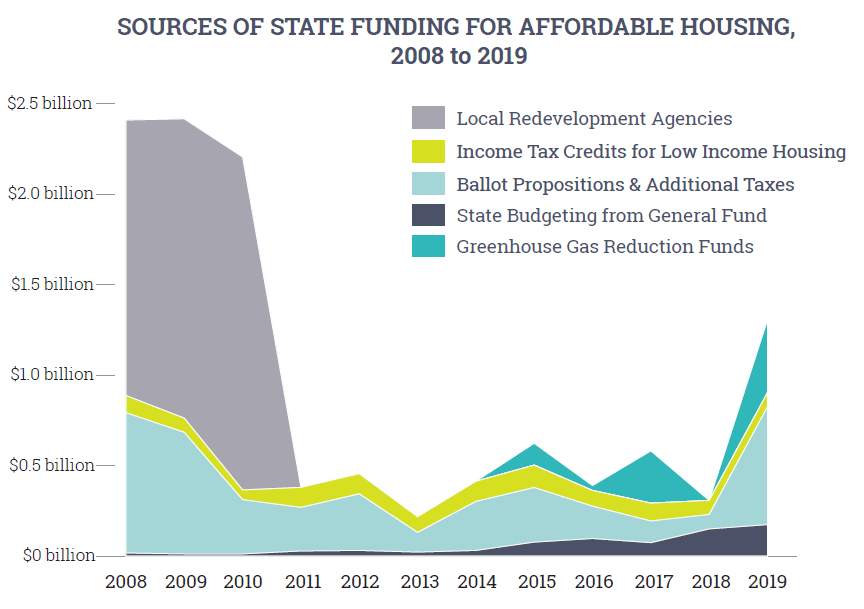 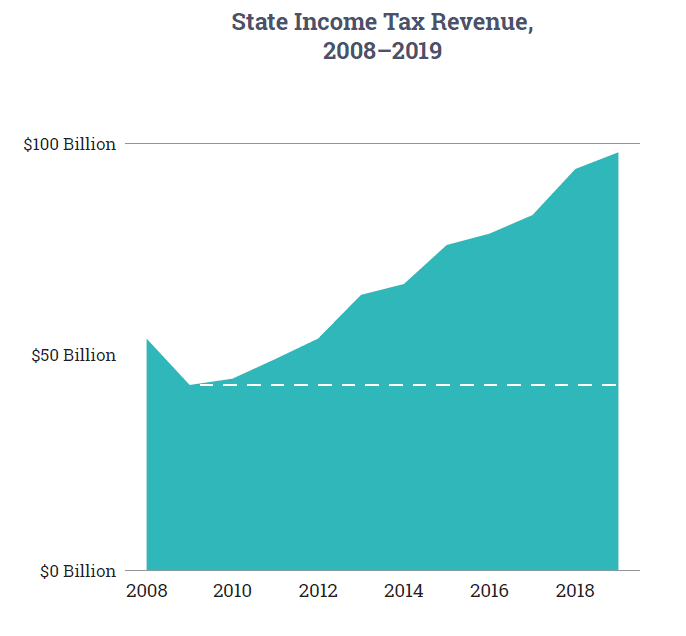 Over the last few years, rather than restoring funding, some state legislators have blamed local zoning and tried to use state-mandated density bonuses to spur affordable housing development. Now adopted bills including SB-330 (2019), AB-1763 (2019), SB-35 (2017), SB-375 (2008) and recent amendments to the Housing Density Bonus Law (originally adopted in 1979), were designed to stimulate affordable housing production through the streamlining of approval processes, the provision of additional density bonuses as incentives, the creation of CEQA exemption, and the supply of a new funding mechanism for sustainable affordable transit-oriented development (TOD).

Although it is still too soon to assess the impact of the two bills passed in 2019, it seems clear that prior incentive approaches are not working as the state is building less new affordable housing than it was in the 2000s (see Fig. 3). 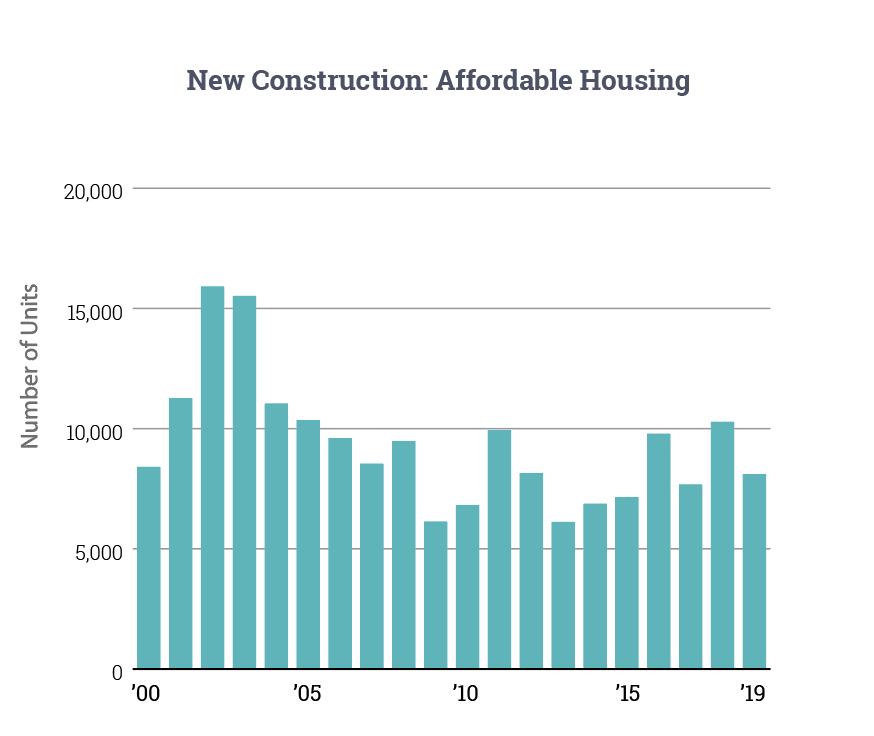 Streamlining and incentives originally put in place to encourage low-income housing are now on offer for higher income brackets in the current bills (SB-1120, AB-1279, SB-995). These new incentives add further complexity to an already complex system of incentives and have the effect of overriding current law and pitting the production of higher-income housing against lower-income housing – an unfair fight. According to some studies, misaligned incentives (and requirements) is already an issue with some inclusionary zoning ordinances, which the latest bills do not address or attempt to solve (Terner Center for Housing Innovation at UC Berkeley).

It is reasonable to assume that the market will take care of market-rate housing. If this is the case, then the state should focus on using tax dollars to help fund state mandated affordable housing and meet RHNA targets. The real affordable housing story is that we lag in production because the state does not choose to fund it (Embarcadero Institute, 2020).

Future bills should consider the variety of funding mechanisms available to developers and local governments and investigate ways to make sure each funding model is sustainable and large enough to fund the affordable housing needed to meet existing state targets and need.

3. Upzoning and Continued Erosion of Local Land Use Authority

This year’s set of bills move away from proposing higher densities around major transit stops or in “jobs rich” areas, to instead encourage duplex, triplex, and fourplexes by offering additional streamlined approval incentives or allowing upzoning in existing single-family neighborhoods. Although this may serve middle-income buyers, this approach will not create affordable housing in high-density markets where affordable housing is needed most (e.g. the Bay Area, Los Angeles, and San Diego). According to the most recent Regional Housing Need Assessment permit reports, counties are not having trouble reaching the state’s market-rate housing goals (Embarcadero Institute, 2019).

Over and above the market concerns, a number of these bills (including AB-1279 and SB-902) continue to emphasize “objective design standards” in an effort to ensure vaguely written land use regulations (such as subjective design controls) are not used to deny otherwise compliant housing projects. However, many of these same bills use vague or complex criteria to determine areas where local governments should or must allow higher densities, housing types, or offer concessions. Because these criteria are often vague and rely on findings released by the Department of Housing and Community Development after the bill is passed, it is impossible to analyze the neighborhoods and areas that may be impacted by these new requirements.

In addition, municipalities and counties are already required to have a General Plan with chapters on housing and Regional Housing Needs Allocation (RHNA) targets. Local plans are generally informed by knowledge of the sites best suited to affordable housing development. No data suggests that state forays into municipal planning are providing positive results but are burdening local governments with additional development process and compliance requirements.

Finally, these bills are being considered during an uncertain time, when California and the nation are facing a deep recession and a potentially weakened housing market (CalMatters). The uncertain future economic outlook for state and local governments, not to mention private property owners, developers, and businesses, will undoubtedly impact the residential and commercial real estate market in California.

In the short term, increased unemployment and economic uncertainty could lead to a softening of the housing market, though not necessarily uniform across all areas (CoreLogic Housing Analysis). Early real estate market data points to an increased interest in small cities and rural areas Redfin, 2020). With the shift to remote work, and an uptick in California’s domestic out-migration, real estate insiders are preparing for “a seismic shift towards smaller cities” (Redfin, 2020). Longer term, the economic hangover from the shelter-in-place order could delay and/or reduce construction of new housing. With a potential market disruption upon us, pressing ahead with the ‘old normal’ may place the California State Legislature out of step.

The following are short descriptions and potential changes for six of the main housing bills currently being considered. A summary table of these bills and others being proposed can be downloaded here.

This bill introduces “opportunity areas” a term now in use by the California Tax Credit Allocation Committee (CTCAC) to define areas that qualify for low-income tax credits. “Opportunity areas” will potentially align with the CTCAC opportunity maps but notes they will be defined at a later date, after the passage of the bill, by unspecified “academics”. The areas currently defined by CTCAC are posted here: https://belonging.berkeley.edu/tcac-2020-preview

In addition, housing projects with up to 10 housing units would be a “use by right” if all 10 units were for moderate-income housing (100% of Area Median Income — AMI) OR a developer pays a fee to build market rate units. The fee calculation differs if the housing units are for ownership or rental, but the expected fee amounts may be lower than the amount necessary to construct the equivalent affordable units elsewhere.

Assemblymembers Gonzalez and Chiu | Based on 5/22/2020 Assembly Version

Existing law grants density bonuses to developers on a sliding scale allowing them to enlarge a housing project by 20-35% depending on the percentage of affordable housing units in the project. The 35% density bonus is reserved for projects that include either 11% very-low-income units, 20% lower-income units, or 40% moderate-income units.

SB-2345 alters the density bonus scale. Projects that currently qualify for 35% are now eligible for a 50% density bonus. A “density bonus” allows an increase in the total number of units as a reward for having a certain percentage of affordable housing units. On the surface that seems like a good thing, however, the extra housing units are typically market-rate, and that is where the issue lies.

This bill would authorize a local government to pass an ordinance that overrides any existing local restrictions (including those passed by voter initiative) on adopting zoning that allow up to 10 units of residential density per parcel, if the parcel is located in a transit-rich area, a jobs-rich area, or an urban infill site (see Note 2). Areas designated by this ordinance would not be considered a CEQA project, providing an additional incentive/exemption.

This bill evolved out of Senator Weiner’s previous upzoning bills (SB-827 and SB-50), which both had an affordability component. SB-902 does not have an affordability requirement but continues the push to upzone large areas in many cities, including single-family neighborhoods and areas protected by voter approved initiatives. By allowing upzoning of any parcel at any time, it potentially upends existing precedents against spot zoning and introduces a conflict with state law that allows local voter initiatives to have precedence.

Senators Atkins, Wiener, Caballero, and Rubio | Based on 7/27/2020 Assembly Version

In 2008, SB-375 introduced a CEQA fast-track for infill affordable housing built near transit. SB-375 is now part of the California Public Resource Code. The law requires a developer to include affordable units within a housing development, to qualify for CEQA fast-tracking: either 20% moderate-income units, 10% low-income units or 5% very-low income units.

SB-995 attempts to reduce the qualifying standard for a CEQA fast-track, lowering the affordable percentage requirement to 15% moderate-income. While a project is still required to be infill, there is no requirement that it be within a certain distance of public transit.

Senators Atkins, Caballero, and Wiener | Based on 7/27/2020 Assembly Version

This bill would require a proposed housing development containing 2 residential units or an “urban lot split” to be considered ministerially (without discretionary review or hearing) in zones where allowable uses are currently limited to single-family residential development. This effectively allows duplex development to be a “use by right” around the state, regardless of local zoning or general plan guidelines. The bill also allows for a CEQA exemption and reduced/no parking requirements for developments near public transit.

This bill would allow local governments to apply for state grants to help rezone idle sites used for a big box retailer or a commercial shopping center to instead allow the development of workforce housing (housing for households with income greater than or equal to 80 percent of the area median income, but no more than 120 percent of the area median income). This bill creates an incentive to convert idle big-box retail to moderate income work-force housing projects.

Senators Caballero and Rubio | Based on 6/18/2020 Senate Version

If housing projects meet these requirements, they may consist of entirely residential units or a mix of commercial retail, office, or residential uses. Projects would be for SB-35’s streamlined ministerial approval process and would allow a project to request that a local agency establish a Mello-Roos Community Facilities District (for financing of site infrastructure and improvements).